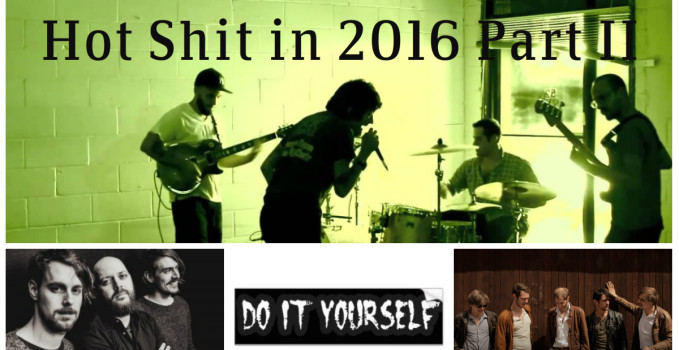 So here we go again. After we let a few professionals tell you what’s going to be shithot in 2016 at the start of the week, we continue with part II. Again we asked the same questions to some of our friends in the music industry. We’ll have to wait and see what will come true but you’ll hardly find better guesses from people who really know what they are talking about! Happy reading!

David is working as artist manager for Mec-Early Entertainment in Berlin. He works with artists such as Kontra K and OK Kid. In his spare time he manages Newmen from his hometown Frankfurt.

Hopefully not as turbulent as last year but exciting nevertheless. Hope dies last and the force be with us all.

Whatwearetalkingabout and the trailer for Star Wars Episode VIII.

What are the trends we won’t be able to escape from this year? What is going to be the real hot shit in 2016?

The channels are already given and all blatantly bloated. Content will be more and more important to stand out from the mediocre. With great power comes great responsibility.

After Bilderbuch and Wanda paved the way, bands from Austria will finally take over Germany!

Personally, I hope the Primavera Sound Lineup. I already bought my ticket because I fell for the David Bowie Hoax and as a big fan I can’t wait for the new PJ Harvey album.

It is about time for a grunge comeback but it’s much more likely though that house music will continue its triumph – Filous, a 18 year old music producer from Vienna, will play a big role.

Video Live Streaming Apps. I want to say Meerkat, because I love their logo, but I think Periscope will continue dominating this market.

As an artist you have to be everywhere – facebook, twitter, snapchat, your own homepage etc. … In 2016 Streaming will finally find it’s way into the mainstream-market. So I think artist profiles on Spotify, Apple Music (Connect) etc will become much more important.

My 2015 was extremly packed with so much stuff happening and so many relases I worked on, that I hope 2016 will – overall – be a bit calmer than the year before. But really, I don’t want to moan, it’s been a great year overall.

To change things up a bit, I am looking forward to takeing over the management for one of, if not the, greatest artist I had the pleasure of working with in the last year – I can’t openly say yet who it will be, but I am so much looking forward to the new challenge.

If we are not looking too far in the future, I am 100% sure that the new FJØRT record KONTAKT will turn Guitar-Germany upside down. It will be out by the end of the January already. It’s a beautiful hardcore record and reminds me a lot of one of my favourite bands of all time, Alexisonfire.

Furthermore I also think that 2016 could be another great year for Indies, and maybe a breakthrough year for the public to pick up on this phenomenon. There are countless examples of bands with self-built DIY structures around them that managed to sell way better then some of the major acts, who play bigger shows and while only spending a fraction of the money a big label would do. I just love when people are succesful by „not playing by the rules“. So, here’s to more (real) DIY-success in 2016!

I’m really not that big on trends. But I am kind of hoping that some of the new acts emerging this year start using real instruments again instead of wavy sound textures, synthesizers and loops. Let this be a year for guitars, drums and bass, played by real people that make music for the sake of joy first. Business should come second in our line of work.
Still, a little less Wanda would be nice. Hahaha…

I’d love for my friends in Heisskalt to reign 2016 with their new record coming out. Sure, they’ve been very successful already, but they earned it – they work so hard and deserve all that is coming their way. They have had to stomach some big setbacks, I think, and I hope this year turns out great for them.

On a bit smaller scale, I think THIS APRIL SCENERY should get some recognition. Their new album will drop on Midsummer Records in the first half of 2016 and its a manic joyride from start to finish.

New music by Brand New, Radiohead, Kanye West, Rihanna, Blink-182, Basement, a new Star Wars movie, a new season of Game of Thrones and Virtual Reality Gaming consoles that nobody can afford. Netflix will double the number of original series to over 30 for 2016 – so we’ll probably have to go even more nights without sleep. Further I’m flying to the US for the very first time this year which I’m really looking forward to. And I’m hoping to release more great video game soundtracks on vinyl through Black Screen Records.

If any band out there keeps surprising their fans, it’s Radiohead. I have to admit that I only discovered the band for myself last year and I would love to see them live this year touring a new album. Thrice and Brand New will surprise as well. Thrice posted ‚Drums are done for #TBEITBN“ on Instagram so maybe the new album will already come in the first half of the year. A lot of fans have been waiting for that. The same thing can be said about Brand New, who released a first song since their 2009 Album Daisy with Mene. In December Glassjaw released a new song called NewWhiteExtremity. That could be a surprise. Hopefully the guys will release something else in 2016.

FACT Magazine recently wrote in an article that 2015 was the year pop got ‚weird‘. As examples they spoke of Grimes, Halsey and Miley Cyrus, who’s albums I really loved. I hope this trend will continue in 2016 and that the year will give us more great pop records.

The new Gorillaz record! That’s going to be the hotshit in 2016! Or do you mean Taylor Swift in 2014 and Adele last year? I’m guessing Katy Perry and Lady Gaga will battle each other again this year and maybe Gaga will be more successful than with her mediocre last album Artpop.

I have such a slow internet connection at home that I’m avoiding all channels that take a long time to load up. I’m pretty sure that streaming services will keep on growing in popularity. Even I have got an account with one of the many services in the meantime. On the other hand there are quite a few vinyl subscription services. You’re getting a vinyl record each month but you don’t know what it will be beforehand. Some even offer exclusive runs. Maybe I’ll give that a try in 2016. I don’t even need fast internet for that.

If you have missed part I you can check it out here.