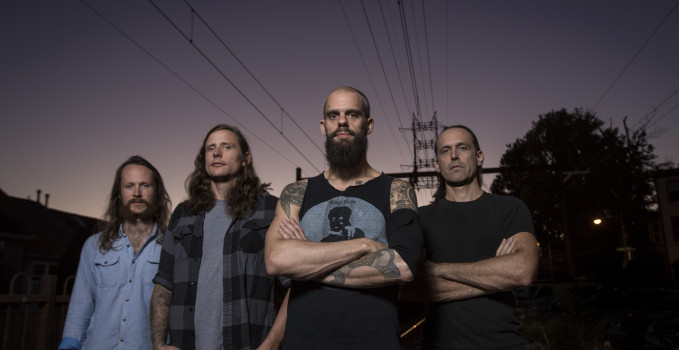 Metal is a genre of music that I am usually not fond of. Obviously I had a phase in my teenage years when I listened to Metallica, Iron Maiden or Sabbath, but from relatively early on, I switched alliances to two minute songs without guitar solos. Honestly, I couldn’t stand metal bands. At every show in every bloody youth club I played or spent music in, a crappy metal band was already there. It took me some time until I found some access to the genre again.

Baroness, from Savannah, Georgia, are one of the bands that made me appreciate metal music again. Their 2012 double album Yellow & Green was an immense piece of work. But a heavy bus accident on tour in the UK in the same year led to some big changes in the line-up of the band. The follow up album Purple is the first one recorded with a new rhythm section. I got a taster of the newly looking band in late 2013 in Seattle and I loved it. No pretentious fuck-a-doodeling, no corny high-pitched vocals. Just heavy guitars, a tight rhythm section and great vocal hooks.

The opener Morningstar rips just as I recall them sounding live. The record in general feels heavier than Yellow & Green. The sound stays clear of standard metal productions with dead sounding drums and guitars emptied of mid-frequencies. Much credit has to go to producer Dave Fridmann who has produced The Flaming Lips and MGMT amongst others and also mixed Tame Impalas debut. His influence might be heard in the form of wavering synthesizers and phasers which are added to great effect throughout the album.

Songs like Try to Disappear or Chlorine & Wine posses anthemic qualities that are hard to withstand. And why would you want to? Purple feels like a cleansing record. One that speaks about life and death. A record from the heart and the guts. Purple has historically been the color of emperors and power and Baroness might have chosen it as a signal of their will and ability to overcome the near death of their accident. In any way, it’s a great heavy rock and metal album. John Baizley and his group have recorded a great album and a more than worthy follow up! Purple will make a lot of people happy. But that it is here in the first place is something every fan of Baroness should cherish. Long live Purple!

Purple by Baroness is out December 18th via Abraxan Hymns. You can pick up the album here.