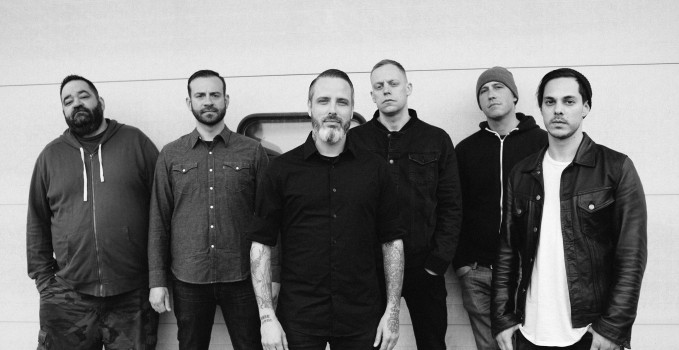 Saying goodbye to one of your favourite bands at some strange festival sponsored by a telecommunications company and where they played as a support act (!) for Good Charlotte (!!) just didn’t feel right. But it happened in the summer of 2007. And then there was darkness.

…until late 2010. Self-ironic as they are, boysetsfire returned to another telecommunications festival thingy and shortly afterwards announced to be back as a band full-time. And, as they say, the rest is history: a new (pretty great) album („While a Nation Sleeps“), sold-out 20th anniversary marathon shows and now – another new album. Self-titled (s/t).
Giving an album the name of your band often is an act of telling the designated listener: „this is what we do, this is who we are“. And, as I’d like to express beforehand, that also applies to boysetsfire’s s/t.

The already released Savage Blood opens the new album: heavy verses and a chorus to singscream along. And the singalongs directly continue with Cutting Room Floor (you probably know that one already, too…), which has this special vibe taking you back to the „After the Eulogy“ days. An instant classic, if you ask me.

The following Don’t panic is one of those songs that works best while you’re jumping around in the pit, I guess. But ok, at this point I have to admit that bsf’s heavier stuff doesn’t always fully work for me in the studio versions – I do miss the sweat and the action and the muffled sound of bodys crashing into another at some run-down former industrial building. Headphones or boxes just can’t imitate that. This is also true for The Filth is Rising and Coward, although the latter has a really captivating chorus to which I silently screamed along with just after the first listen: „the rise of power through fake crises / the cry of weakness and alarm, you’re nothing more than a coward / preaching paranoid self harm / further reaching down“.

But there’s also the other side of s/t: One Match is a pretty classic punk rock song (it even features some „woohoos“ – a boysetsfire first, if I’m not mistaken) and therefore probably the obvious choice for the first official single. And yeah, that chorus really gets stuck in your head (though come on, am I the only one who hears a bit of old Rise Against here? Not that this is a bad thing!). Heaven Knows takes the same line (another anthemic refrain, damnit!), while Fall From Grace brings back memories from „The Misery Index“ with a bit of pathos and its dynamic build-up to yet another great chorus.
The final three songs then don’t leave much room for breathing: Dig Your Grave is another candidate for the mosh song of the week, a status the re-recorded Bled Dry already has achieved over the last few months during bsf’s live shows. But there’s also a little surprise hidden at the end of the album: Breathe In, Bleed Out, the penultimate song, features a chorus Muse couldn’t have done better (back when they still were cool) before the verse just flings you around again into the arms, back and shoulders of that other guy jumping around beside you.

So, what do we make of s/t? Sure, it’s not a reinvention of the wheel, but: did anyone honestly expect that? We get everything we could have asked for: captivating, danceable punk rock songs to sing along to on the one hand and heavy moshpit crushers to make you feel 18 again on the other. If I had to rank it with the rest of boysetsfire’s discography – which kinda feels like choosing the child you love the most – I’d put it between… ah, fuck that. It’s another great album, go, listen and decide for yourself.

Boysetsfire by Boysetsfire is out 25th of September via End Hits Records.
Pick up your copy here.