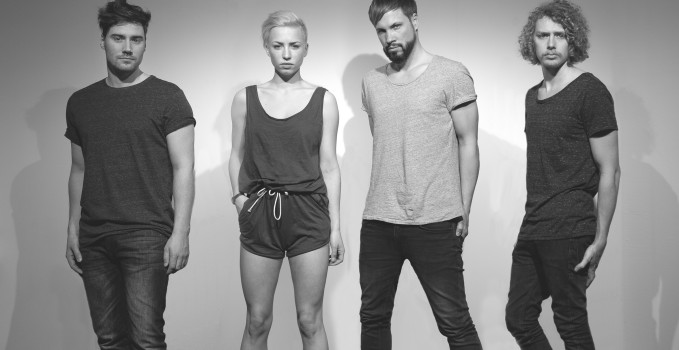 Cosby – As Fast As We Can

When you start working in the music industry you naturally end up making friends who work at labels, managements, booking agencies or whatever it is you can do with music to make a living. Over the course of the last few years I’ve met plenty of people. Some are total morons, some like to brag, some you meet just briefly and some become trusted allies and friends. It must have been around this time a year ago, that one of those good friends of mine mentioned Cosby for the first time. He was buzzing about this new band he’d come across and that he was going to work with. I gave it a listen and completely understood what he was talking about after I saw their first video for Love and War. This wasn’t the sound of your typical German indie band. It was what good electronic indie would sound like no matter where a band is from.

One year from then and As Fast As We Can is finally released via the bands own label Just Push Play. Cosby have taken their time in their own studio in Munich to write and produce all by themselves. It’s probably a good thing that there is no big label involved. How many times have we seen albums by newcomers pushed back or released too early. The band seems very settled and unagitated.

With all this in mind, Cosby’s debut album is a very good record. An album full of brilliant hooks, catchy melodies and embedded in a production that is as good as any from across the pond or from any sugary pop producer up north. The most obvious sonic reference coming to anyones mind surely is Chvrches. The similarities are obvious: Female vocals and a very danceable mix of electronic beats and synthesizer melodies. But while Lauren Mayberry’s vocals have that resonating innocence, Marie Kobylka can be a lot heavier (Love And War) or more dramatic (Hardest Thing) than her Scottish doppelgänger. Her range is incredible and suits the varying soundscape Cosby produce. Similar differences can be found in the music. There’s the dancefloor numbers like the opener(As Fast As You Can) or EP track Boon and Bane. There are mid-tempo songs (Never or Pieces) and ballads (Hardest Thing) and then there’s the über-track with Everlong.

It’s an understandable decision not to make this a single. It’s a bloody Foo Fighters cover. But I’ve hardly ever heard a band nail it so fantastic. The song feels like it was written to be played with synthesizers and with a four-to-the-floor beat. I love the original, but now I’m not sure if this isn’t better after all.

Basically I would love this band to get any attention they can out there. Because they fully deserve it. This is the kind of music people like. So give them the chance to do so! I’m more than happy my friend showed them to me that while ago. If the (music-)world has any sense of justice, Cosby need to become stars. Maybe not today, maybe not tomorrow, but soon. The potential is definitely there. I can’t wait for the future!

As Fast As We Can is out now via Just Push Play.
Pick up your digital copy here.
Or your physical here.