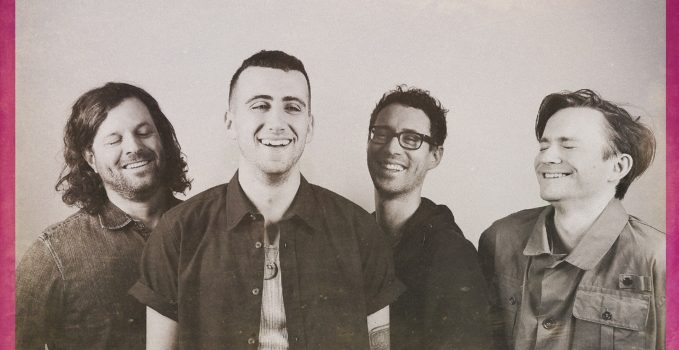 There is something beautiful about imperfection. The little wrinkle when she’s smiling. The hint of green in your blue eyes. The scar on your shoulder. The few grey hair even though you’re too young to have grey hair. Imperfection makes people unique. It makes us remember. Cymbals Eat Guitars always had a nag for writing imperfect pop songs. And I blame myself for not paying more attention to them earlier. To me the bands new record Pretty Years is the celebration of everything imperfect.

Finally kicks the record off with a broken guitar sound and crackling melody before bass and drums crash in. The vocals are echoy, the drums sound overdriven. Joseph D’Agostino’s voice fights, sings, screams, cracks and serenades all in one hell of a opening track. There’s a great ebb and flow feeling to the song, a culmination of noise when melodies become to dominant that end in melodies themselves and an abrupt end. It is a record full of ‚could-have-beens‘ in the most positive sense. Cymbals Eat Guitars could write the sweetest pop songs but they opt not to. They write lavish melodies but decide to hide them under a blanket of dissonant sounds. Wish for example has a sexy groove and even some sax in the mix, but these sprinkles are just odd collections of noise until the song opens in a thick chorus before dissonance brings back the groove. Dancing Days is one of the most beautiful ballads of 2016. The piano leads, the bass follows and again, the drums are in overdrive mode. They scratch, they creak, they build tension. It’s a delicate song that comes as a result. Like young love this song could be over too soon, it could collapse at every second and just as it is about to, it calms down again. Just brilliant.

4th of July, Philadelphia (Sandy) is a straight rocker (as much as straight makes sense in the sound cosmos of Cymbals Eat Guitars) with a huge roaring bass sound and followed by Beam the dirties and fastest song on the album. As the band did within the songs before the noise is broken down by the next song Mallwalking. A ballad with space-like effects on guitars and synth. This time the drums don’t sound broken and D’Agostino’s voice is less raspy than on the rest of the songs on this album.

Overall Pretty Years is a challenging record. I’ve rarely been drawn in by the aesthetics of a record as much as in this case. The band has perfected the concept of deconstructing pop songs. Listen to the one and a half minute fade out in the last track Shrine, the song just dissolves. It’s the pure imperfection in every song. The fragility that carries the record. It’s hard to pick out a favorite song because they all make sense on here. They all belong on there. If you like Tim Kasher and Cursive then you’ll love Cymbals Eat Guitars! Guaranteed.

Pretty Years by Cymbals Eat Guitars is out September 16th via Sinderlyn. You should pick up your digital copy here.