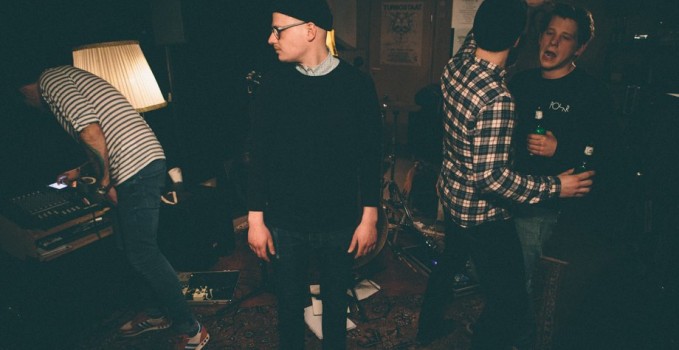 Where the fuck is Gütersloh? And what the fuck is German punk? And why are there people in Germany who are angry? Aren’t Germans supposed to be the happiest people on the planet? Economically safe, politically more than stable (thanks Angela), spearheading Europe and so on and so forth. Well thankfully punk never gave a flying fuck about safety and satisfaction. It’s times like these when someone has to point out what’s going bloody wrong. And there is a lot of it, if you listen to how pissed off Freiburg are on their new record Brief & Siegel!

A few weeks ago the band put out a video for Kanüle Abwärts and I was somehow shocked by the aggression and fury of the song. I had bought their last record Aufbruch on vinyl almost instantly after listening to Das Verhör which reminded me a lot of older Muff Potter and early Turbostaat. With hindsight, the album wasn’t as close to those two as that one song suggested, but it was a good German punk record. Maybe the production was a bit too scrappy or too thin, but I was closely tracking the band. Brief & Siegel, which translates to ‚Letter and Seal‘ or maybe to ‚under hand and seal‘ if we’re talking more about the meaning, is a monster of a record. A streamroller of noise and force, a dozen fists hitting you facefirst and then squeezing your guts.

The first three songs are a clear sign of intention. ‚We are here and we hate you. If you’re with us, you can come along.‘ It’s this descripancy of open disgust mixing with inclusion that always fascinated me about punk and still does. Song number four ‚Sommer, Roggen und er‘ has the title of a Turbostaat song and for the first time, the band takes its foot of the gas. A little at least. There’s also a nice lyrical nod to Joy Division in there. The following Im Moor keeps the sound on the lighter side (light in the sense of: the sunrays you see while gasping for air in a see of noise and darkness. That kind of lighter side). But the song that hovers above them all is Kanüle Abwärts. It has every essence of what makes this a great album condensed into one song.

The label says that the band has matured with this album. Intro magazine wrote this week that you don’t need to reinvent a genre to make a great record. Visions says the album sounds as if the band would love to run head-first through a wall. I’m just going to say that it’s intense, loud angry and fucking great! Big love for Freiburg and their new album ‚Brief & Siegel‘

‚Brief & Siegel‘ by Freiburg is out now via This Charming Man Records.
Pick up your copy here.