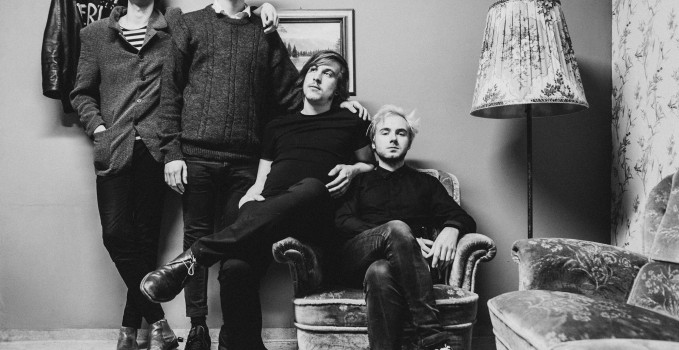 When I get asked to review new hyped band – especially from Berlin – I usually don’t expect anything. Which makes it even nicer when I am proven wrong. This has been the case with todays’ band Isolation Berlin. The four boys have recently been mentioned a lot in feature pages and it seems as if everyone agrees that they are the future of German pop music. The pressure therefore is obviously on and everyone expects their debut album Und aus den Wolken tropft die Zeit to be a huge success. Quite frankly it definitely has good chances. Not because it is the most innovative sound I have ever heard. Because it is definitely not. Neither are they geniuses when it comes to playing their instruments. And their front singer most certainly does not have the greatest voice (especially considering that the other German hype band Annenmaykantereit has a front singer with the best voice I have ever heard in German music, but that is a totally different story). But there is a certain charm in their sound and in their lyrics that made listening to their record a real pleasure. Music nowadays often sounds completely over produced and unreal. Something this record definitely cannot be accused of. It rather is the epitome of German art. The country of poets and philosophers is known for its prose and the lyrics are definitely the strength of Isolation Berlins’ music. The songs describe the Berlin attitude towards life, caught between anger and grief, struggle and acceptance. Fahr weg and Verschließ dein Herz are those kinds of songs that leave you rethinking your life choices and Und aus den Wolken tropft die Zeit is the kind of record that you dislike in the beginning but that grows on you over time and becomes one of you go-to records in times of doubt.

What I hate most in music reviews is the desperate try to describe the sound of a band by comparing it to other artists. During their short career Isolation Berlin have been compared to Rio Reiser, Ton Steine Scherben and Fehlfahrben. Do they sound like them? Well, somehow yes. Maybe? The problem with these comparisons is that they make it sound, as if the artists are copying someone and Isolation Berlin definitely do not sound like a copycat. It’s neither Punk nor New Wave. Neither Sixties nor classic German rock. Isolation Berlin have their own sound. The sound probably lots of people hear when they move to Berlin. Lost and without a resort. But at the same time it is the sound of hope and solace. Confused? Well then you should probably give it a try and listen to the record yourself. It is definitely worth it, trust me.

On a side note: As someone who has read many artist-infos, Isolation Berlins’ definitely made it into my top three: “The four musicians have beautiful, gentle faces, just like angels and just like the young Marlon Brando, wearing motorbike-clothes and a cap.”