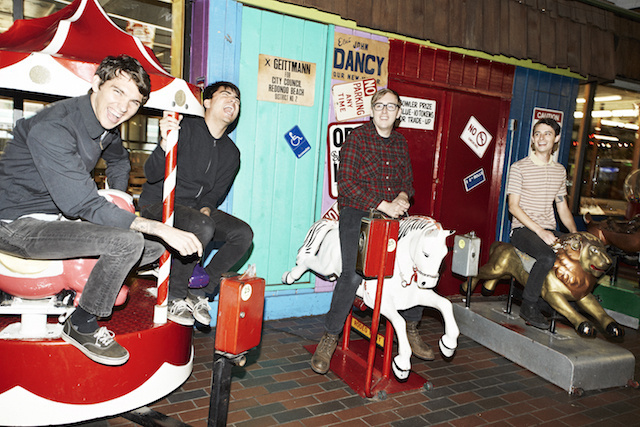 Looking at your face in the dark, you don’t even look that smart

Some things take a little while to reach a certain degree of quality. Things like a good red wine, a single cask whiskey or a great guitar are getting better with age. Some bands tend not to follow this logic. Their debut albums will always be cherished by some fans as the opus magnum.
When you think about punk rock, it doesn’t even have to go that far, as some bands tend to exist for only a handful of years, and if they do manage to exist for longer, their output might stay quality (think Bad Religion, Nofx et al), but it never reaches the heights of their earlier work anymore.

Joyce Manor’s previous two albums plus a collection of songs have barely managed to break the hour mark (that’s all of them combined!) and their new album ‚Never Hungover Again‘ just adds a tiny 19 minutes. Is that enough to even speak of albums then? Well, let’s just say it is enough and not get held up by some technicalities. It’s their first album for Epitaph Records, and their first away from homebase Asian Man Records. I was very sceptical of that move after I wasn’t really happy about the so cherished Alkaline Trio releasing average albums via Epitaph (yes, I do adore their first two on Asian Man!). But when I first heard „Catalina Fight Song“, my nerves eased off a bit. It was all back to the one-minute-into-your-face-punk with pissed off vocals, roaring guitars and gnarly cymbals.

You disappear into the crowd, I don’t know what you’re trying to tell me

The sound on the album is a little thicker and probably more condensed. Barry Johnson’s voice is more defined now and he even manages to add a little croon every once in a while. It’s just all more refined (listen to the little synth bed in ‚Falling In Love Again‘ and the reverb heavy fade-out). Final track „Heated Swimming Pool“ even had NPR going as far as comparing the record to UK-heroes The Smiths, but I don’t really see it. Yes, the record has a tendency to the more dramatic or melancholic feelings, but it rests in a bed of energy. And the band showed their affection for 1980s music on their last record, by covering ‚Video killed the radio star‚. After weeks on daily heavy rotation, I guess I can say that this has turned out to be a great record. If you’re ever in need of a quick mouthy and loud turn-on, press play on this record!

‚Never Hungover Again‘ is out now via Epitaph Records.