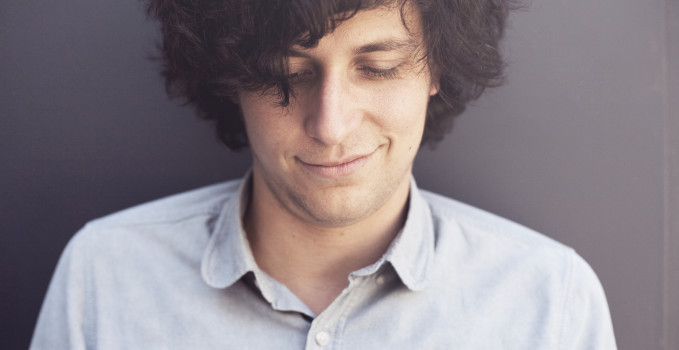 It must have been in early 2015 when I find myself sitting in the office of a record company. I’m here to talk about the labels‘ forthcoming releases and have a bit of a general catch up to do. We smoke a few cigarettes, drink a coffee or two and listen to some interesting artists. Towards the end of the meeting I get shown a video of an artist the label just recently signed. They were out with him in California and used the time to shoot a video they say. It is not to be released for another couple of months. The song is called I Would Do It All Again and the artist in question is L’aupaire. His voice is amazing. I haven’t heard anyone sing like that in a long time. It’s a very mature voice, a voice full of grit and too many nights at the bar. It’s strange for a German artist to sing with such a profoundness in a foreign language. He’s not far off the great singer songwriters when it comes to his voice. I’m hooked. I need more of this. The only problem is, there isn’t anything else to hear just yet.

I’m laying in a hotel bed in midtown New York. The temperatures outside are far too hot for mid December. It’s getting close to Christmas and I still need to buy some presents for my family. This city has a brutal pace and a constant noise level crawling through the window. I am not used to this. I am listening to Flowers the debut album by L’aupaire that won’t be out until March next year. I’m overwhelmed by this city. I love the US but every trip here seems to make me really emotional. I try to understand the reason behind all this. I’m here on a business trip and I’m feeling privileged. But as it’s the end of the year, I somehow start to recap the last months, the last year, the last few years. I question the decisions I’ve made over the years. It’s not a crisis, at least it doesn’t feel like one, but part of growing up. I don’t know if Robert Laupert has questioned his decisions, but his music sounds contemplative, melancholic and so rural that it is the fitting soundtrack for these thought laden days in the big apple. The perfect cure for all the exhaustion caused by this city.

An old Mercedes facing an empty landscape. We’re sitting on the backseat as the driver’s door opens, a blonde girl drops her jacket on the passenger seat, jumps in, closes the door and starts the engine. She takes us through mountains, stops in the desert to smoke a cigarette, then we drive towards the sun. She is beautiful, I can say as much. If she kidnapped me then I’m fine with that. We drive until it gets dark and we arrive at the sea and she walks towards the waves. The River is one of the lighter songs on L’aupaire’s debut album. But in the same vain as Always Travelling, Rollercoaster Girl or Uptown Diva it carries that dreamy mood, it weighs down on you. It pulls you towards the surface, the chair you’re sitting in, the bed you’re lying on.

The songs are not laden with electronic plucking or unnecessary beats. It’s quite a classic instumentation. And yes, quite an American instrumentaiton as well. But the longer Flowers runs, the closer it gets me to tears. I’m not too much of a lyirc guy, but the subliminal mood that seems intagiable at first gets clearer when you gave the album a few listens. I have rarely listened to such a coherent debut album. Robert Laupert seems very aware of what he can and cannot do as an artist and as L’aupaire. The album is a extraordinary pop record rooted in Americana, singer-songwriter craftsmanship by a young artist with a unique voice. I would not expect him to go right to the top of the charts (the music is too clever and too handmade for that), but he will be around for a long time, if this is the standard he is setting.
For my part, I’ll keep this record close to me in the forseable future. For the late night walks back home, for the long drives and journeys or for the nights with or without that significant other. I won’t regret that.

Flowers by L’aupaire is out on 11th of March via Virgin Records.
You can pick up your copy here: iTunes / physical