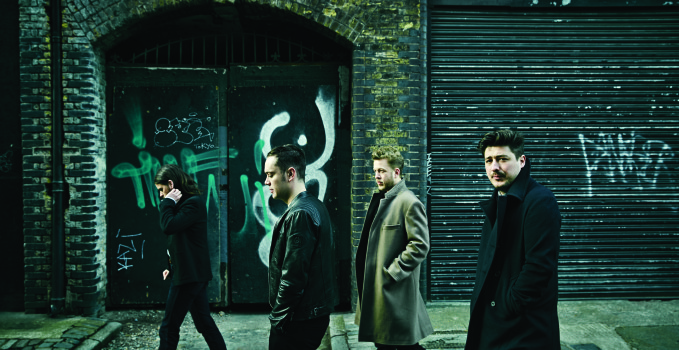 So Mumford & Sons have released a new record. It’s called ‚Wilder Mind‘ and apparently everybody is supposed to hate it. All the critics who were all so buzzing about this band when they played ‚true folk songs‘ are now hating the band. But why?

Apparently in rock or even worse, in folk, you’re not allowed to change your sound. All this talk in the many reviews about how bad or meaningless this record is are just a bloody farce. Wait, a banjo is missing? The record now has rock songs and doesn’t rumble along like the last two? What the heck? Are all you critics out there retarded? Do you hate this little band so much, because they all of a sudden felt like a change in approach was needed? Isn’t that what music as an art form is about?

Ok, let’s pick up from the beginning. ‚Sigh No More‘ was a successful album with ‚Little Lion Man‘ a great anthem for all those student folk that went to summer festivals with flowers in their hair and tons of pills, weed and drink in their pockets. It was a good tune, and the album became a success. That was in big parts down to all the critics and media out there too. It was your little band. Finally a band again that you could all treasure so dearly and be ahead of the curve. When ‚Babel‘ even went gold in Germany and pretty much all other big music markets, you were all standing there, arms crossed before your chest, nodding away, saying: We always knew it.

The second album topped the first one in terms of commercial success and the stages got bigger with every tour. But did you listen to it? Wasn’t it just a sure shot? A mere extraction of the debut’s recipe? Anyway, it was your triumph over the masses. It was your band that you fell in love with the first time they played in a little barn, or the cool festival only a few tastemaker make it to.

I promised you everything would be fine

The new record ‚Wilder Mind‘ must feel like an insult now. Mumford & Sons are not writing the same songs anymore. It’s not the third version of their debut. It does what you want from all the other bands you hate. It’s a step forward. It is aiming for the big stage. It’s aiming for the top chart position (and look, who would have thought, they reached the no. 1 in UK, USA). And it does that with a mixture of guitars, drums and Marcus Mumford’s voice (that one hasn’t changed and was always the most recognizable thing about the band. Not the fucking Banjo!).

Do you remember the stories about Bob Dylan being booed off the stage when he played with an electric band at the Newport Folk Festival (the band’s name is the Band and they are fucking great!). Looking back every fan who booed him off the stage must feel stupid. This record will make the band bigger than they ever were. I doubt that they care about the music writing snobs who feel betrayed or insulted or whatever. Chris Martin might not be a great example, but ask him and the other three cold players how many fucks they give about the critics reaction to their last albums.

Wilder Mind is a good and solid rock record for the everyday music listener. It offers great songs (Sneak Eyes, The Wolf, Cold Arms) and doesn’t feel artificial at all. Just a record by a band. A statement of intention: We want to go full monty. Yes guys, go for it. They’ve got it in them. Three albums in I’ve got no doubt that they’ve got it in them.

Wilder Mind by Mumford & Sons is out now via Island Records / Universal Music.