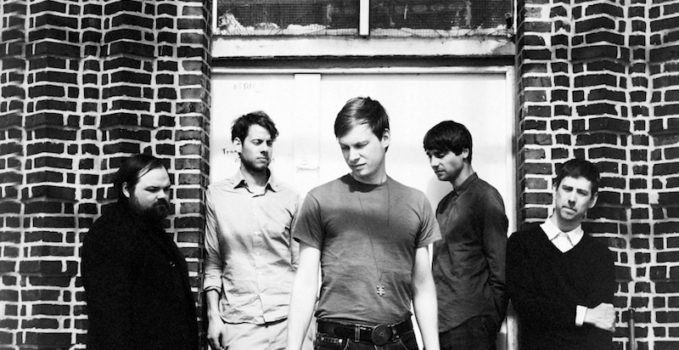 There is a difference between music you actually like and music you can appreciate for its value or the artistic value underneath it. I always found it hard to differentiate between the two. I still do in fact. Messer have always been one of those bands to me. On the one hand, my indie and punk heart is telling me that I should like them. On the other hand is the music though and that is not making it easy for me to like them. Too cool. Too distanced. Too fragmented. Too arty. Too bored by itself. Messer have tried to be more than just a band. They wanted to be a statement, a stance. The first time I felt I could really like their music too, was Neonlicht. It’s a gem off of their second album Die Unsichtbaren, but it was just an accident it seems.

Jalousie is the name of Messer’s third full length. I am pretty sure it will again lead to a lot of feuilleton stories, articles and raving reviews. The press release speaks about a collection of dark short stories by singer Hendrik Otremba. And it is Messer’s biggest selling point. His voice, this monotonous gnarl, half singing, half talking, hasn’t changed much. The songs dribble past the listener. Hooks and catchy melodies are a rarity. Ok, the band does that on purpose, but it doesn’t help the cause. After two albums of the exact same recipe, just adding some bongo drums every once in a while (Der Mann der Zweimal Lebte, Detektive) just isn’t enough to keep the listener interested. The twangy guitars can’t add much relieve. The bass still rumbles on. The drums still pluck away. But you have heard it all before.

Jalousie isn’t a bad album per se. But it becomes a heavy burden on the listener. The black and white cover says it all. There are no sprinkles, no colors, no glimmer of hope. It’s just a collection of bleak songs with dabs of noise. Messer are demanding. They claim the sound for their vision. I am not ready to put up with just the lyrics though. I want a record to excite me. I don’t want to be numbed by music. I am very sure I am missing the point of this record. I am sure certain, that some people will love the band for the seriousness, for their art and will be enraged by my ignorance. But with this record, Messer are to me, like a blunt knife at the cheap pizza place, something I could have done without.

Jalousie by Messer is out August 19th via Trocadero.
You can pick up your copy here.