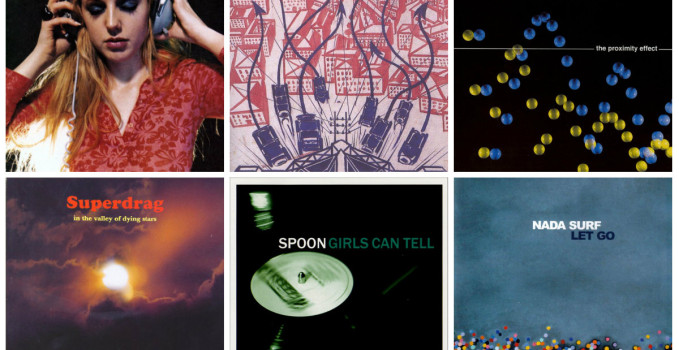 In 1999 there was a silent outcry from alternative rock music fans when due to consolidations within Warner Brothers Records (and the rest of the major labels) a lot of bands that had been signed in a post-Nirvana alterna-gold rush got dropped from Elektra. „Fuck you Elektra“ was a phrase that could often be read. Looking back on what followed I would like to turn this around and thank Elektra very much.

Not only did signing these bands away from indies in the first place give them recording opportunities they would otherwise not have had, resulting in some amazing sounding albums. Getting dropped after only one or two of those and being left empty-handed also made them reinvent their musical identity instead of giving them the possibility or obligation to „sell out“.

Three of my long time favorite bands happen to be Elektra-droppees and that can’t be a coincidence.

Perhaps the least spectacular example is Superdrag who refused to put aside any of the royalty advance they got for their second Elektra album „Head Trip In Every Key“ that was recently re-released through Side One Dummy. Obviously the resulting Beatlesque arrangements and sound did not meet the label’s expectations (i.e. another version of the slackery power pop record that their 1996 breakthrough „Regretfully Yours“ was) so they were let go.

The band’s 2000 follow-up on Arena Rock „In The Valley Of Dying Stars“ presents an angrier sounding Superdrag with lyrics that are more or less openly processing the feeling of betrayal and loss that came with the departure from Elektra.

After the release of the final „regular“ Superdrag album, 2002’s excellent „Last Call For Vitriol“ came several hiatuses and reunions along with an awesome catalogue of released and unreleased music and fortunately no more hit singles like the retrospectively unbearable „Sucked Out“.

Superdrag’s masterminds John Davis and Brandon Fisher have returned in 2013 as The Lees Of Memory. Their debut „Sisyphus Says“ is an amazing record and I can’t wait for the follow-up they are busy recording.

Nada Surf’s (excellent) 1998 sophomore album „The Proximity Effect“ was the last one they recorded for Elektra. After the massive success of their first record’s lead single „Popular“ the band went into a bigger studio and had to use different guitar gear on every track of the album in order to justify that decision. Maybe that’s one of the reasons why the result turned out to be too diverse and multifaceted to cater to a mainstream rock audience. Elektra who had demanded and been refused another hit single did not release the album in the US and dropped the band while they were touring Europe.

It took the band four years (in which they re-released „The Proximity Effect“ and a collection of B-Sides on their own label while tirelessly touring) to return with another record called „Let Go„. The album reflected the band’s spacious live sound a lot more closely and showed them finding power in quiet rather than in outbursts, a completely successful musical self-discovery undoubtedly owed in part to being free from major label constraints. They have since released four records (plus a collection of covers) that have had the same signature sound but „Let Go“ remains their masterpiece, probably due to the profound life-affirming melancholy that lingers through its 12 tracks.

I am only one of a lot of people I know who would name Spoon as their favorite band (and in some cases I am proud to know that I introduced the band to them). Spoon was dropped from Elektra after only one album, 1998’s „A Series Of Sneaks„. Every song on that record is really good and it should have been enough to have kept them in the Warner family. Ron Laffitte, however, the band’s A&R at elektra quit soon after the release and Spoon were subsequently dropped.

In the phase of disappointment that followed Spoon recorded a 7″ entitled „The Agony Of Laffitte“ which kind of says it all.

As with Nada Surf the first album that Spoon delivered after being dropped from Elektra found the band re-defining their output in a way that would later be recognized as their signature sound. Their less is more-approach of thinning out each instruments track down to its essence rather than adding lots of layers therefore giving each sound a lot of space had been there all along but first became a trademark on 2001’s „Girls Can Tell„.

With every album that followed Spoon managed to further build an audience that kept buying their albums regardless of an overall negative trend in physical sales so that without becoming mainstream in any conceivable way their last three albums went straight into the American Top 10.

All three of those stories might have gone a lot different if these bands had stayed on a major record label – not necessarily for the better. So thank you Elektra!