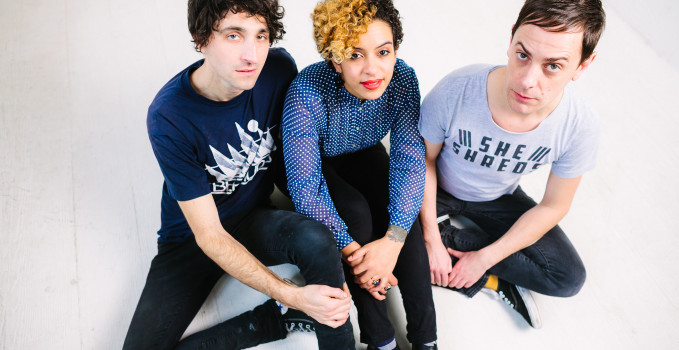 The Thermals – We Disappear

„We Disappear“ came to me through the complementary wifi at Heathrow airport as I was waiting  for a flight that kept getting delayed. I ended up listening to it six times in a row and the journey it took me on in these three hours (the ten songs clock in at almost exactly half an hour) was a lot more meaningful than the actual traveling I was trying to do.

There was this instant familiarity with the music that I first felt in 2003 when I was listening to some mp3s trying to decide whether or not I should go see their show that night. I went there and had my brain washed for good. From then on I would see the world through Thermals eyes.

There also was a refreshing otherness about the album. The six Thermals records before it were all pretty homogenous in the sense that if a new musical or topical aspect was revealed it would be carried through the whole record. „We Disappear“ holds a whole bunch of new musical facets and still manages to feel like it has always been there after a couple of spins.

Here’s why, nerds: the two halves of „We Disappear“ each follow the structure of a five act play as in classic drama, which makes you – or at least me – feel really good.

„Into The Code“ and „In Every Way“ are classic openers that set a musical pace – rocking – and establish the plot: we are living in a world where we are giving up on our privacy in exchange for what looks like virtual immortality. We are grown-ups in the sense that we realize that having and losing everything in a relationship might be our own fault.

„My Heart Went Cold“ and „The Walls“ are dealing with regret about missed opportunities and mistakes made while trying to do the right thing. You can feel the action rising towards the center of each side of the album.

„Hey You“ and my favorite track „Thinking Of You“ are both instant hits and obvious single choices. They are also dealing the most directly with the key sentiments that are haunting the album: the ever-present certainty of death and the lingering loss of love.

„If We Don’t Die Today“ and „Always Never Be“ are total airplane songs. They lyrically and musically mirror the weightlessness and the surrender of control that comes with flying. It feels really strange and also really meaningful to listen this kind of music when you actually are on a plane.

„The Great Dying“ and „Years In A Day“ are both very untypical tracks. Sonically they would feel at home on maybe an Unwound or a Nada Surf record. They offer a slowness and edge that are both vulnerable and serene and have not been there on any Thermals song before. They still feel familiar right away.

All in all „We Disappear“ is an album that reminds us that we’re all fading but The Thermals are not. In the last ten years I haven’t met anyone who does not love this band. And I don’t want to. Amen and happy Easter!