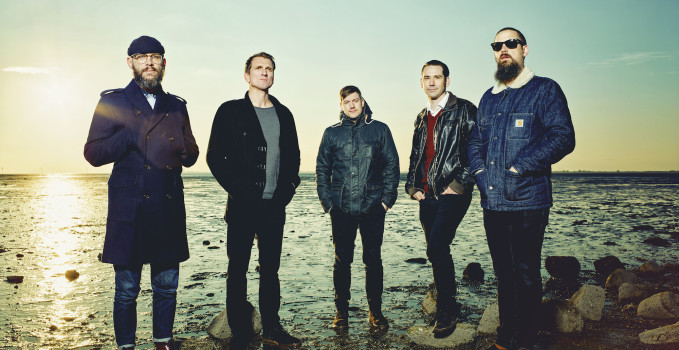 Turbostaat. It’s been a little while (two years is not that long to be honest). I remember as if it was yesterday when I went to my first Turbostaat show. Back then I had just moved to Hannover and none of the people I knew wanted to come to the show with me. I ended up drinking way too much beer by myself and leaving the show with the biggest smiles on my face I’ve ever worn after a gig. I went to a girl afterwards who’d become my girlfriend a little later, and everybody laughed at me for how drunk I showed up and how buzzing I was. They just hadn’t seen what I’d just seen.

Since then every Turbostaat gig and every video and album have become a little celebration for me. There’s a tingling sense of excitement that starts in my fingers before catching on throughout my whole body. It reminds me of how nervous I got every time I bought a new album when I was young. Was it the right decision to spend 16 Euros I had saved on that old Pennywise record? Or should I go for the Rancid double vinyl? It didn’t matter because every record then helped my musical education. I needed to have as much music as possible anyway.

It is different now. We are all flooded by an unbelievable amount of releases, promo emails and youtube links on facebook every day, that a lot of music gets boring after a listen or two. So looking forward to releases by your favorite artists is something I really treasure. And finally, one of them has a new record out. Recorded within a week at the famous Hansa Studios in Berlin (home to records by David Bowie, Iggy Pop, the Pixies and others), Abalonia is probably the most conclusive concept album the band has written (I’d count Das Island Manöver as a concept album too, so I count three now). The bands trademarks are there. The airy and punchy guitars, the rumbling bass, the junk room drumsounds, Jan Windmeiers gnarly sprechgesang, the cryptic lyrics. As you’d expect from the band this is not a light-hearted record full of flowery melodies and plenty of ‚ohs-and-ahs‘, leave that to bands from California. Husum in the far north of Germany is a different place, a different kind of coast and people there are from a different mold. Their home has always left a deep mark on the band.

Abaloniais supposed to be a modern fairytale deeply rooted in punk ideology and musically in the post-punk microcosm of Turbostaat. There’s an underlying sense of anger and frustration. The feeling is simmering throughout every note. But it is rarely boiling over as explicitly as in Geistschwein. Most of the anger can be boiled down to real life observations made main songwriter Marten Ebsen. Observations of capsized refugee ships, right wing protest marches and growing xenophobia. The album captures a dangerous atmosphere that sweeps across the country in the real world and abstracts it into a musical story of miss Semona who leaves her environment in search of a better life. Abalonia stands for the place of desire, for a better life and a future. And like anyone who has ever talked to a refugee will know, that journey is full of stumbling blocks and can drain everyone. This album takes you on, it scratches you, it hits you and it transports a lot of emotion.

I really appreciate the complexity and the overall story beneath the record, but at first listen I was missing one or two standout songs. It takes a few listens to understand that the album has to be listened to in its entirety to fully appreciate it. Turbostaat don’t need to take any risks within their sound, but what distinguishes Abalonia from The Island Manöver or Vormann Leiss is the overlying concept, the structure and the lyrical directness. The more chances you give the album, the more it will grow on you. It’s another Turbostaat record. And another great one. I’ll definitely have that tingling feeling in my body again, once the next album is about to be released!

Abalonia by Turbostaat is out January 29th via PIAS/Rough Trade.
You should pick up your copy here.