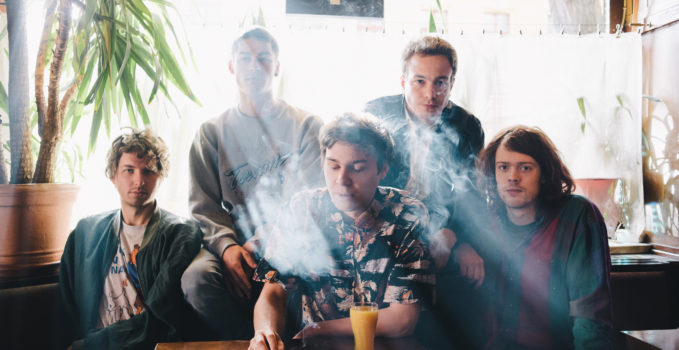 Germany’s music landscape has been marked by a rising number of young and mostly male indie-pop bands lately. They all met in school and started off in their parents garages. Von Wegen Lisbeth is one of those bands and their story is not really different to any others. Not that I am saying their background is boring by any means, but if there is nothing new to tell, then there is simply nothing new to tell.

Most famous example at the moment: Annenmykantereit.
AMK are touring in sold-out venues and have paved the way for many other bands just like Von Wegen Lisbeth, especially because they are best known for being good buddies with AMK and their go-to support act. And shortly after 2016s release of AMKs’ debut-album “Alles nix konkretes”, Von Wegen Lisbeth just released their debut-Album “Grande”.

Another thing, they AMK and Von Wegen Lisbeth have in common, is their adolescent worldview and their thematic bubble of student-life, break-ups and the struggles of growing up. Once again, nothing new unfortunately. Every now and then one can stumble upon a catchy line such as “Ich habe 99 Probleme und Du bist jedes davon“ (In: „Drüben bei Penny“) or “Jetzt wird wieder in die Lobby gespuckt“ (In: „Freigetränke“), but overall the lyrics are neither deep nor catchy, neither touching nor overly entertaining.

Soundwise they are closer to the Austrian funk-pop band Bilderbuch, yet they lack their extravagant Glam and Chic. Don’t get me wrong. The quality is good, beats and riffs are on point, but somehow “Grande” is missing something unique. It seems to be a pattern, but nothing about Von Wegen Lisbeth wants to strike me as new, to a point that I am actually bored writing this.
“Grande” is an okay Album. It is not bad, but it is not great either and quite honestly, just between you and me, those kind of mediocre records are the worst and they even make me angry. I always find myself wondering if the artist did not give it their all and if they did not try hard enough. It is okay for me if records suck, as long as I can still hear and feel that the artist at least tried. But mate – please don’t bore me!

“Grande” is unfortunately nothing that will leave you mind-blown. You can listen to it once and it will be okay, but then you just forget about it again. The album lacks a bit of heart and a lot of soul, or maybe the other way around. But heads up guys – maybe the next record will be better. There have been many other bands, whose debut-albums were not convincing and they still made it big times. As I said in the beginning: Von Wegen Lisbeths’ story is not new – so who knows where their path will take them.