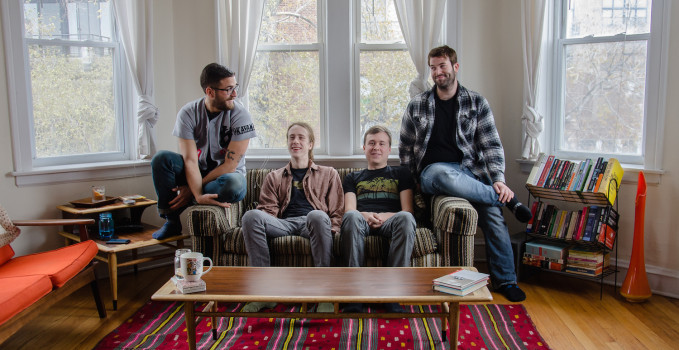 Once a year the National Hockey League (why is it called national by the way, when there are teams from the US and Canada in it??) is holding a regular match in an outside venue. Because you can’t play ice hockey in the summer (that would just be weird), it’s played around new year’s eve and since has been label the ‚Winter Classic‘. I’ve got no idea if that is all true, but my internet research has led me to believe it is. Naming your band after such an event might be seen as a little risky. Or cocky, or whatever. But to be honest, who gives a damn about that anyway? What counts is the music. And believe me, Winter Classic have quite a big release out with their debut album Past Times!

Now that you’ve clicked the play button, we can go on. I would love to watch a video of the best NHL checks and fights to this soundtrack. I grew up loving pop punk records before I moved on to hardcore and then finding Rites of Spring and mid-western Emo. Chicago is the midwest (although I’m not entirely sure why because if my geographical knowledge isn’t entirely wrong it’s not the middle of the west…). It’s a city with hot summers and cold winters and seasons play an important role in this record.

Guitars as heavy as body checks. Twinkly lines like face-offs. Gracious vocal melodies reminding us how Wayne Gretzky or Jaromir Jagr would caress the puck around the rink. Songs come crashing in on Past Times like wave after wave of skilled attacking moves tormenting your own defensive resilience. You just can’t handle this emotional mix of rhythm changes, quiet/loud dynamics and forceful riffs.

I could go on all day with the hockey references, but Winter Classic have created their own classic with this album. It’s rooted in pop, extracting post-hardcore heaviness (the sizzling distorted guitars), some metal dual-guitar lines (Dick’s Drive In), emo melodies (all a bit more minor than major) and sprinkles of twinkle (rhythm changes, guitar fills etc). In my opinion this is one of the most underrated albums of the year. It literally has everything you want from a guitar record. Go out, put your ice skates on and have fun with your friends to this painfully brilliant record!

If you love bands like Small Brown Bike, BearVsShark, Dogs on Acid or You Blew It!, this is the band you cannot afford to miss out on!

Past Times by Winter Classic is out now. Support the band via their bandcamp page!