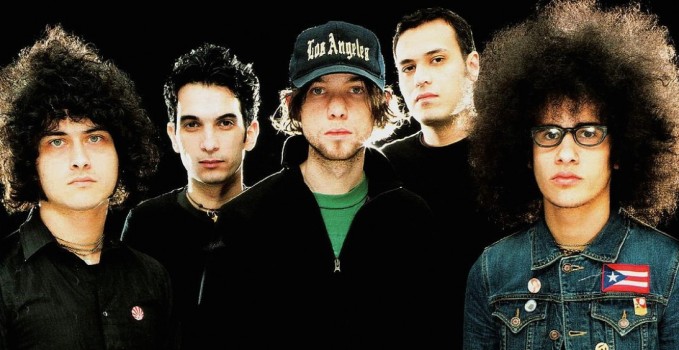 Talking Pop: At the Drive-In

In 2001 the TV in my room was the gateway to the world. I was living with my parents in a small town in the deepest South-West of Germany, right next to the border of Switzerland and France (yes, that’s three countries in a few mile radius). Music television was a thing back then. MTV still played video clips. Do you remember that? I didn’t really have the chance to go to many gigs because that would have involved a 2 hour drive to Zürich in order to get to see bigger bands I was into back then. The alternative would have been a youth club, which we didn’t really have at that time and hardly any of my friends were that much into music. Limp Bizkit, Korn or Cypress Hill and Eminem were the stuff that excited us when MTV played them. There was no room for these bands on the radio stations our parents listened to. And the internet was too slow to properly download anything even illegally (logging into the internet also meant that the phone was busy which neither my mom, nor my dad or my sister were too happy about).

So it was either going to the shop next town and browse through the alternative section at the department store that sold music, or watching Viva Zwei (the cooler version of the German music channel Viva, which eventually got sold to Viacom and today exists as a half day program on free TV in Germany sharing the same channel with Comedy Central. It’s all really messed up). I would watch Viva 2 Rock religiously at 9pm on Tuesdays and Thursdays. If I can remember correctly, the weekly alternative chart show was on on Thursdays, while Tuesdays were for a 1 hour magazine like show. Every once in a while they also filmed some shows and showed live clips during the show.

At the Drive-In is one of the few bands I can really recall seeing. And now, while looking back, I do understand why that is. Relationship of Command was and still is one of those unbelievable classic albums. 45 minutes of pure energy, power, anger, melodies, weirdness, creativity and message (yes, you could throw in sex as well). When I first saw the show, I didn’t understand what was going on. I loved that the broadcast looked so rough, the colors in the clip looked the same on TV back then. We were miles away from HD. The whole thing was filmed in a youth center, quite similar to the one I would play my first gigs in a little down the line. The band is really into their music. It seems like there’s nothing else that matters more than this exact moment. Cedric Bixler is already starting to drift off in some weird stories before the songs. Omar Rodriguez is making random noise with his guitar, seemingly on a complete different planet, while the rest of the band is trying to keep it all together.

I was blown away by this band. But I couldn’t comprehend it. Nowadays I think I loved how approachable it was. The band was on a crappy stage, I could have played a venue like that. The focus was on the energy, something I to this day love most about seeing bands play live. Without a presence acts can’t cut it for me, no matter what genre. But they were not you bog-standard punk band, they played with so many influences. They added so much to my musical horizon. I didn’t buy the album until a few years later, when my teenage brain was mature enough to understand everything about this complex album. At the same time it wasn’t so far off that the songs got drowned out. Everything seemed to sit exactly where it should and every single note and sound seemed to add to each song. It all needed to be right where it belonged.

When At the Drive-In broke up some of my friends really got into The Mars Volta’s debut album. But I hated it. I thought it was rubbish and I’m still very sceptical of this whole prog-rock jazz influenced music bollocks (in German there’s a term called Muckertum, which describes the attitude of musicians whole love themselves and their musical abilities so much that they end up bathing in their own shit, while forgetting about the song). Sparta did a good job going into a more focused ‚indie‘ direction, but they never had the energy At the Drive-In had. The whole break-up story of the band was later brought to paper in a great article published in Visions magazine. It’s a pity and a long story about big egos, different creative directions and human relationships. Maybe they should have just left it at that. It would have been one of the great mysterious legends of rock and roll history. A fuck it, whatever. For me it still is.

Thanks to the great 90s Screamo/HC/Emo/Indie group on facebook for surfacing it!