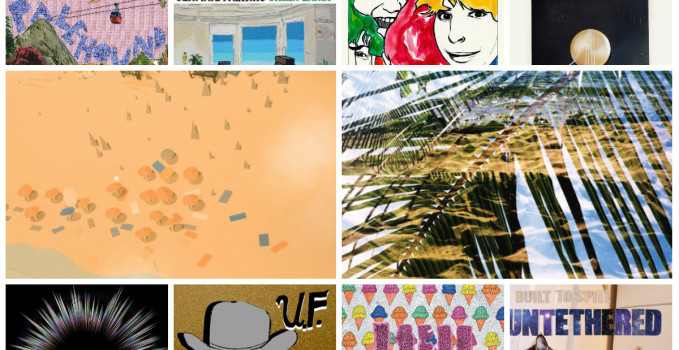 There you have it. I’m making an end of the year list before it is cool. In alphabetical order. Wow. Great stuff. Let’s call it a year!

21 years after „There’s Nothing Wrong With Love“ – the album that first had me falling in love with Built To Spill – Doug Martsch still doesn’t know how to do anything wrong. Let me put it like this: There must be something wrong  with you if you don’t love it.

This is one of the albums I bought after the first listen because the songs feel familiar immediately. The band sounds like they are really feeling each other and the tunes. The production is crisp and fat and still it feels like you are listening to the band having fun in their rehearsal space.

Most of my Emo-loving friends care that this band has members of Algernon Cadwallader and Snowing. I don’t. I just love that they sound like a tasty blend of old Weezer, Piebald, Slowride, Rival Schools with a twist of lemony Superchunk.

About ten years ago a friend of mine introduced me to „Keep Guessin“ by Hockey Night, an album he had just bought because the guy at the record store had put a post-it on it that said „Buy This – It’s Good – Like Pavement“. If I was that record store guy I’d move said post-it to this massively listenable debut by four young Liverpudlians.

After two records for Sub Pop Jaill are back at Burger Records to deliver this fine set of catchy tunes. Featuring a completely new line-up „Brain Cream“ is not as twangy and direct as the 2010 masterpiece „That’s How We Burn“ but then I guess you only get to make a record like that one once.

„Delusion Moon“’s opening title track is one tidal wave of a song. It combines a very deep and topical slogan with a no bullshit Albini-ish punk rock sound that’s just rolling over you. And after that there is a dozen more songs that can totally live up to the promise this track makes.

This far into 2015 I have had a couple of girl-singer crushes that blew over in just a few weeks but the thing with Palehound is serious. Lyrically „Dry Food“ is one of the finest breakup albums I’ve heard and musically it hit me right in the 90s-sweet spot.

Surgeons In Heat were what first made me believe in 2015 as not another shitty year for new music. You can read all about me falling in love with them here: http://whatwearetalkingabout.net/music/surgeons-in-heat-disaster/

Ultimate Painting is Jack Cooper and James Hoare of Veronica Falls and Mazes. That’s also what this sounds like, very 60s, very relaxing, wonderful sticky melodies. This is their second album to be released within less than a year. If they make a third one I’ll get that, too.

David Crane of BOAT made this record with Charles Bert of Math And Physics Club and it is the perfect album for people who find that BOAT is too sloppy and M.A.P.C. is too cheesy. They said they were trying to make the perfect pop record. That’s certainly not what happened but I love BOAT and this.