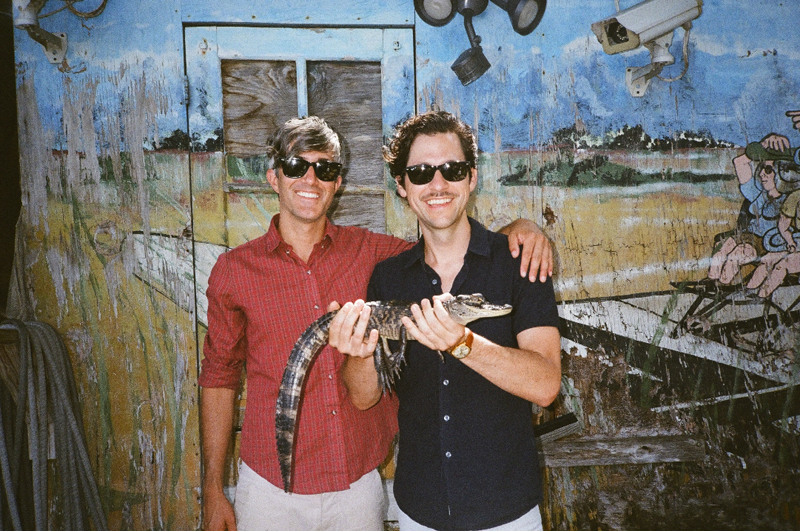 Talking Pop – We Are Scientists

Summer 2006.
I spent the summer in Barcelona in a desperate attempt to improve my Spanish. I ended up going out a lot more than I ever did before, I probably drank a lot more than I should have, I didn’t sleep as much as one should have over the course of my time there and I probably improved my English more than my Spanish. But I also met a lot of great people. This trip was the reason for me to go to study in the UK and for why I am where I’m at now.
During one of the days, I was talking to Dan, one of the great people I met, about music. I bought the Killers first record at Fnac and he kept on raving about how good the album was. He then went on and on about this new US band he just saw in Manchester. His eyes were shining so brightly when he recalled it in his memory. He was talking about We Are Scientists.

Oktober 2010.
A few beers at my apartment in Hannover and I’m off to the venue. It’s the first time I’m hanging out with Marc, who now has become a good friend of mine. We’re joined by Frauke, a coursemate from uni. The venue is neither small nor big. No support band, as far as I can recall. The band powers through a set of high energy hits. Nobody can resist to not dance. Keith Murray jumps into the crowd for a little dance off with the fans halfway through the set. Andy Burrows drives every single beat like it could be everyone’s last and at the end fans and band leave the venue in sweaty t-shirts but with a goddamn smile.

March 2011.
Marc and me are standing behind two CD-Players and a mixing console. It’s about 1am, the dancefloor is starting to get really crowded and we’re both flicking through our CD collection. „From now on we have to power through. We’re just going to play hits, hits, hits!“ Marc bells at me. We’re playing „It’s a Hit“, arms aloft, beaming smiles all around, dancefloor packed. We smile at each other and dig for the next song. I won’t leave until 8 am when the sun is already up.

Some time in 2009.
I’m not sure why, but I ended in HMW – one of those stores where you could actually buy CDs, remember? – in Liverpool’s Bold Street and come across a live and b-side collection from We Are Scientists. For 5 quid, an absolute bargain. After moving back to Germany I’ve somehow managed to lose it, but anyway, the bonus DVD had this wonderful footage of a gig in London’s Sheperd’s Bush Empire. My housemates didn’t really understand why I would watch a gig on a dvd, but hey, who were they anyway?

February 2014.
I’m sitting at my desk at work when I receive an email from a local pr contact. The email is announcing the new single by We Are Scientists. I never really fell out of love for the band, they just disappeared from my radar for a little while. Mainly because I thought their third album was good – not great, but also because I delved into other musical realms. ‚Dumb Luck‘ with its spoof splatter elements, is in general a really quality song and video. I always liked the irony the band put on show in interviews and in videos. But this is just taking it to new heights. It put the band back on my radar and I was excited again about their new stuff.

May 2014.
The album „TV en Français“ has all the qualities I love about the band. It’s a great welcome back with all their strengths. It also doesn’t pose any surprises. Some might take this on a negative note, but I don’t. It’s great to have a constant to go back to, to have a solid rock in times of wild water rock slides, electronic production overrides and weird minimalistic rap beats (don’t get me started on tedious EDM). „Make it Easy“ is a hit – and if I’ll ever end up on a DJ-booth next to Marc, be sure we’ll play this song during peak time.

TV en Français is out now via 100% Records / Rough Trade. You can order a copy here.