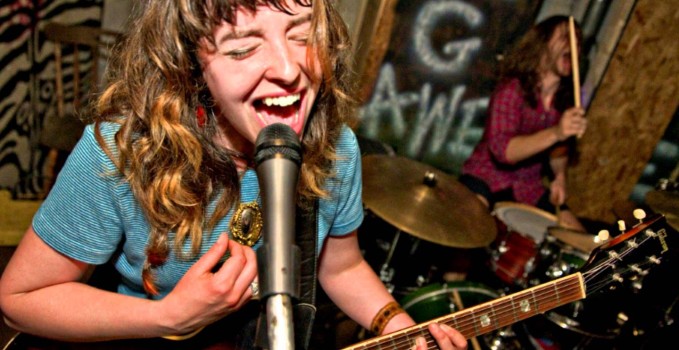 A couple of weeks back, we talked about female bedroom producers and how they are the hottest stuff right now. We are still certain that that is true. And someone from the Independent must have read our article too, prompting this copy cat thing to pop up two days after our post. But the article got us thinking here at the WWATA-HQ: where else are female artists leaving their mark these days? So we dug into our own music catalogues looking for the same thing from a different genre. What we’ve come up with is the following list. It’s just a starting point for all the great female fronted indie and punk bands out there. If we missed something feel free to add it in the comments!

I stumbled across them, when browsing the Bridge 9 Records website and was expecting something completely different. As Bridge 9 was and still is home to great Youth Crew Hardcore, Lemuria took me by surprise. Their sweet pop punk harmonies with nods to emo is great. And when you watch a live video from them playing to a great crowd in Indonesia, you can’t help but fall in love with them. (Carlo)

I first came across Katie Crutchfield via her sisters band Swearin‘, that wonderful ode to mid-1990s indie and college rock. A year or so later I saw both on a small Berlin stage. In contrast to her siblings band, Crutchfield has started off by playing lo-fi indie songs by herself. On her upcoming third album, she’s expanded her sound repertoire, diving into a fuller band sound. She’s still a great songwriter and the lo-fi production has made way to a fuller stereo-sound. What I first fell in love with, her voice, her teenage angsty lyrics and her feminist attitude is all still there. And that makes her one of the best songwriters out there. (Carlo)

Oh Philadelphia, what have they put in your water in the last couple of years? There’s so much great and exciting punk and d.i.y. music coming from your city it’s just unfair to the rest of the world. All we can do is listen in awe from afar. Cayetana are your most delightful all female oeuvre. The way Kelly Olsens voice is close to breaking when she’s reaching for the higher notes is beautiful.
Yes, men are still dominating punk and indie and all sorts, but tell me why women are so much better at singing about past relationships? And why can hardly any women in the pop mainstream do it with as much urgency and honesty? It baffles me, it fascinates me and that’s why I keep coming back. (Carlo)

Philadelphia, it’s always Philadelphia. No matter how many new bands you’ll find on bandcamp or the many blogs you frequently check up on, you’ll almost certainly find a new band from Philly. Hop Along are a little more on the mid-tempo side with their indie-meets-punk. What stands out most are the vocals by Frances Quinlan. Delicate and bewitching one second and then fighting not to break the other second. I love voices like that. And the music does the rest. It’s not your bog standard, it’s exciting and surprising in every song. Well, it’s music to hop along to.
Their new album is out in May. Be sure to check it out! (Carlo)

I started freaking out and telling everybody I was in love with this when Alvvays‘ debut album first surfaced in the form of poor sound quality rips from a self released cassette tape in late 2013. (Boy, was it a hard wait for these songs to get a proper release on Polyvinyl last summer!)  You could already tell that the songs on there were pure indie rock gold. Those were the catchiest hooks I had heard in a long time and all the tracks had them – along with melodic turns that were as unexpected as they were warm and welcoming. Everyone I showed this to immediately got it and shared my crush, so I guess there’s no other option than to love this. Now it’s your turn. (Alex)

When I reviewed their EP a while ago, I was blown away by the raw energy of their music. Looking back now, the energy hasn’t vanished. Sometimes I wonder what it was like to see the Stooges or MC5 on stage for the first time. That sensation of pure energy, of anger and excitement. It’s all quite difficult for us to relive or recreate these feelings as we are exposed to all sorts of music, noise and so on every day. But that first blast in ‚I‚, when engineer finally found the right fader to get the vocals in the mix, is pure bliss. The music is heavier than a lot of the all male metalcore stuff out there and the lyrics are a big middle finger to every sexist, homophobic, ignorant asshole out there.

Katy Goodman used to play bass in the Vivian Girls before she formed La Sera but that’s not why she seems familiar. She is just that type of person who you meet for the first time and it immediately feels natural to be around them. The same goes for La Sera’s songs . They just breathe a sunny L.A. vibe that you feel has always been there but that really only just came alive in those tunes. „Sees the light“ the second of three albums so far is my favorite and a good starting point for a lasting friendship. (Alex)

Courtney Barnett is a phenomenon of her own. The Australian is a singer-songwriter (as in solo artist) in the best sense, her music is timeless blues rock that speaks to all sorts of audiences and most of the lyricists and performers that a benevolent music press has compared her to are men like Bob Dylan or Kurt Cobain. The reasons why she is still part of this list include that she fronts her own band (all male ensemble that she jokingly calls The Courtney Barnetts), that she is punk/indie in the sense that she operates completely D.I.Y., running her own record label „Milk! Records“ and that she is technically female. (Alex)

Another one of those bands you listen to on bandcamp first. Musically it’s got the same direction as Swearin‘ i.e. loud pop punk melodies drenched in distortion and feedback. Hovering above all sit the female vocals. Add some „ohs“ and „ahs“, and you’ve got yourself some right songs that will be stuck in your head for days! (Carlo)

Be Your Own Pet

Be Your Own Pet are long dead but I recently dug out both of their full lengths, 2006’s self titled debut and „Get Awkward“ from 2008 and they both still sound amazingly inventive and entertaining. It’s a pity that the band is often remembered by their commercially most successful single „Adventure“ that does not at all reflect their unique juvenile anarchic quality. Singer Jemina Pearl’s solo efforts as well as all the individual band members‘ output in projects such as JEFF The Brotherhood are all solid but can’t quite come up with the same sort of energy. (Alex)

A friend pointed me in Speedy Ortiz‘ direction describing the band’s sound as a hybrid between early Liz Phair and Helium. That pretty much nails it for their 2013 album „Major Arcana“ which then became one of that years heavy spinners for me. Said album was preceded by the 7″ singles „Taylor Swift b/w Swin Fan“ and „Kaprow b/w Hexxy“ that already demonstrated the bands capability to combine traditional Massachusetts indie rock elements with songwriting and relatable lyrics. Their new album „Foil Deer“ is just out and finds the band in a more experimental yet also poppy mood. (Alex)

Missing my train back home from Paris, where I spent Easter with friends, gave me the chance to see a Laura Stevenson show. It was one oft he best accidents that could happen to me. I fell in love with her third record „Wheel“ when it came out in the summer of 2013. I would describe her music as folk pop, that is punk at heart. Catchy melodies, often dark lyrics and a great voice, that gave me goose bumps that evening in Paris. (daniel)

Header Photo of Cayetana by Cayetana.